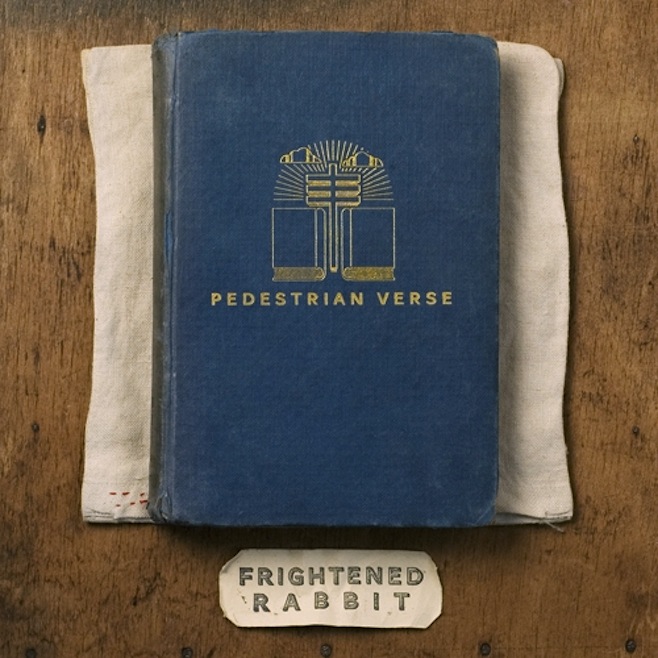 Four years ago, I found myself in a strange accident. Somewhere in a concert venue in downtown Dublin, my leg snapped at a sharp angle and my entire cartilage was completely destroyed. It was in march 2009, and when I left the emergency room that night with my headphones in my ears, and a song by Frightened Rabbit came on. It was “The Modern Leper”, in which singer-songwriter Scott Hutchinson claims, “I’m not ill, but I’m not dead / And I don’t which one I prefer / Because that limb which I have lost / It was the only thing holding me up.” There is veracity in song, there is truth in lyrics; and each and every single one of us has had that moment in their life where words escaping someone else’s mouth has made more sense than the anger-fueled vitriol in their own hands. Frightened Rabbit, ever since their lauded second album “The Midnight Organ Fight” (2008) has revealed its uncanny ability to speak what is usually unspoken, to express what is socially acceptable to leave unsaid. The writing is raw and the music, unmissable; their eerie fascination for the most trouble, primal, instinctive and destructive parts of the human brain should be hard to maintain over the course of several albums. When British newspaper The Guardian started streaming the first tracks off Pedestrian Verse, they warned the listener: this was to be Frightened Rabbit’s darkest record yet.

The first thing you should know about Pedestrian Verse is that it starts off with the following line: “I am that dickhead in the kitchen.”

A Frightened Rabbit album has two different sides: the first one slowly unravels, reveals itself over the course of several songs, is hard to identify, to pinpoint and to understand; the second hits you like a punch in the jaw that dislocates a few teeth in the process. Opening the album with “Acts of Man” is a deliberate choice of the former: repetitive drums and a plaintive voice screams “Let’s promise every girl we marry / that we’ll love them, when we probably won’t”. There are countless stories to be told about men’s failure to love women, but hardly has any band coined the desperation in such a perfect way as Frightened Rabbit does. The album is compelling because it drags the worst parts of us out into the light, distorting our faces in the mirror. Loneliness is a recurring theme in their discography: 2008’s Midnight Organ Fight has been a tale of separation, and 2011’s The Winter of Mixed Drinks is one of loneliness. Each of those two albums has key songs that expose the main subject in a way that grasps your ears, and never lets go. Pedestrian Verse is harder to identify. It is dark, deep, and underground. It is also Frightened Rabbit’s first album released under the umbrella of a major record company (Atlantic), and once again setting themselves apart from every other band with such an opportunity, the difference in sound, production and editing is not that obvious. It is present, here and there, but their recipe hasn’t changed.

Screencap from the video for “The Woodpile”

First single “The Woodpile”, with an incredible video shot in New York City, is easily comparable to 2011’s “The Loneliness & The Scream”. Solid, resonating, echoing percussions anchor the high-pitched guitar screams and the wave-like sounds backing grace vocals. True to his songwriting style, Scott Hutchinson depicts a life full of metaphors, that of profound decay, unwanted conflict and loneliness – “Will you come back to my corner”, he pleads, “we’ll hide and – we’ll speak in our secret tongues”. The hopelessness is present throughout the song, the image of a collapsing building being so prevalent. Said building is later described as one of the most feared staples of society, the state hospital, in which a young woman having suffered abuse her entire life is being welcomed in a system that will never make the promise of improving her life. The first EP release in advance of the album, “State Hospital” reveals its core: “a bloody curse word made pedestrian verse”. If I choose to believe Frightened Rabbit and be mindlessly led to wherever their music is taking me, I will maybe see beauty in the most dire of human suffering, and will be capable of making poetry out of impossible and suffocating situations. There is no telling where Scott Hutchison finds his inspiration: he recently told actor Rainn Wilson he found it in “heartbreak”, but there is obviously so much more than the vapid romanticism of wanting a loved one back. Frightened Rabbit is creating music for a dysfunctioning heart valve, the drums always echoing that of a pulsating organ, the guitar brainwaves lost in electroshock treatment, the voice the only redeeming sound when one is drowning. If “The winter of mixed drinks” evocated being lost at sea, “Pedestrian Verse” is the soundtrack of urban discontent, youthful apathy and longing for better days.

If “Backyard Skulls” and “Holy” are as irreverent and insolent as can possibly be – on top of being blasphemous, which is always a plus – the darkest side of Pedestrian Verse lies in “Nitrous Gas”. This song jumped at me from the very first listen. Stripped bare, reduced to its most simple form, almost innocent and child-like in its harmonies, it is potent, powerful, and compelling. “Shut down the gospel singers and turn up the old heart-breakers / I’m dying to tell you that I’m dying here / throw up the sickly joy and the swell of the sweet self-loathing / I’m just dying to be unhappy again”. Let’s be clear – not everyone is capable of writing something that hits so hard, that shakes, trembles and whispers the darkest moments, the rock bottoms, the insurmontable difficulties tied to depression. Somehow, Frightened Rabbit has made of isolation and suicidal tendencies not a goth-like trend, not an appeal to self-destruction, but an experiment, an attempt, an emotional excursion through the dark recesses of the mind. There is nothing violent, nothing brutal. From the almost too easy vision of “Floating in the Forth” in 2008, in which one contemplates jumping off a bridge and drowning in a river, “Nitrous Gas” is literally a cry for help. It depicts everything that has become too hard to be said, that moment when words are piled up in the throat and choking their owner to death. With “spit out the blue minor misery”, a flood of grey-ish, blue-ish, sea-like colors cover the song, wrap it in softness, engulfs the prospective end to one’s life with the easiness of drowning. The Guardian was right. Pedestrian Verse is dark because it has its screaming, frantically attention-grabbing moments in “December’s Traditions” and “Holy”. It also has the calm after the storm, the resolution, the decisive moment to let go in “Nitrous Gas” and “Housing (out)”.

Last I saw Frightened Rabbit live was in september, in a very poorly lit and small Parisian venue somewhere on the eastern frontier of the city. The band was last scheduled to play, after 11pm, and it’s a shy, self-conscious bunch that took up the stage, fiddled with their chords, and placed themselves in the light. Something however strange and magical happened the moment the drumstick hit the skin. A sort of easiness, comfort and confidence emanated from the band, cheered on by faithful fans who had traveled from their hometown of Glasgow, Scotland (*). It would be too easy to pin Frightened Rabbit as a hangover from the self-destructive grunge of the nineties, or have them carry the torch of every band from Joy Division to Nine Inch Nails that tried to appeal to angst, fear, and depression. Frightened Rabbit has evolved away from all that. There is an inherent willingness to fight and to survive among the pile of rubbish that surround the characters of their songs. There is resilience in the death they promise and contemplate. There is, indeed, a faint light at the end of the rat tunnel. Frightened Rabbit expose their difference with subtleties and absurd humor in their videos, but if “State Hospital” is anything to go by, we can always choose not to jump off the fence. We are free to contemplate our own demise for as long as the music plays, but our minds are beautiful creations, capable of dominating our failures, even in the most pedestrian of verses.

View all posts by: Sarah K